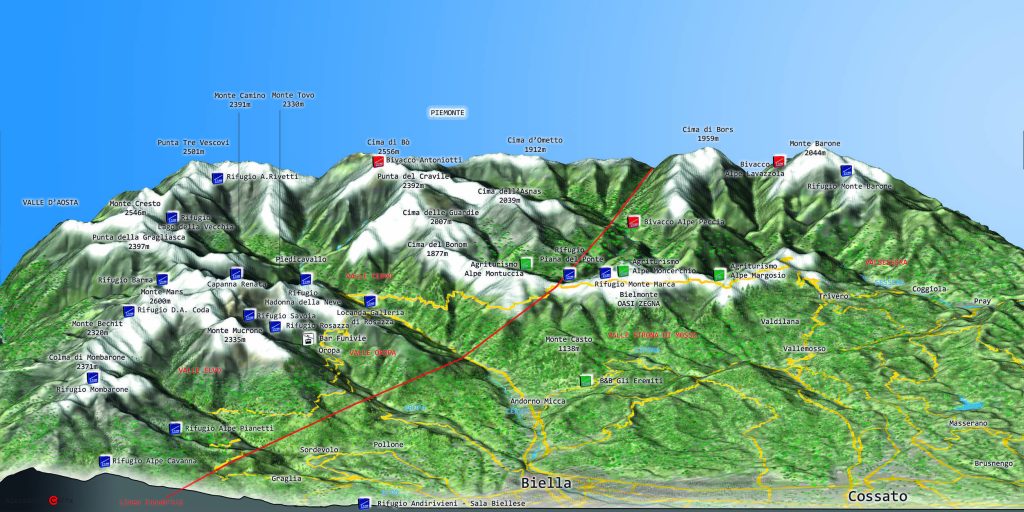 Biella’s Alps: the first barrier that your eye meets looking from the plain to north-west Piedmont, between this region and Aosta Valley.

The highest summit is Mount Mars at 2,600 mt, the slopes are grassy and suitable for pastures, but there are considerable rock elements, especially on ridges. The chain is divided into five valleys, four of them are named after their main stream: starting from west, Elvo Valley, Oropa Valley, Cervo Valley, Sessera Valley, and then Mosso Valley, which stream is Strona.

In this Website you will find Biella’s Alps huts categorized by valley (in case of a minor valley’s hut, you will find it in the closest one); there are also some agriturism farms that for their location may be interesting for hikers.

The territory is surrounded by mountains, and to the west it borders with Ivrea’s territory and its morainic amphiteater, which descends from Mombarone 2,370 mt to the lake of Viverone.

At the bottom of the mountains you can notice the passage of the Periadriatic Seam, which indicates the crash between African and European tectonic plates that caused the alpine orogeny. You will see it between Mosso and Sessera valleys at “Bocchetto Sessera”, through which it is possible to identify a clear discrepancy that joins Biella’s area and Sesia Valley by “Bocchetta della Boscarola”.

Most of the hiking paths to Biella’s Alps Huts are accessible from Biella in a one-hour car ride or by public transport from the railway station; then, according to the pace, a couple of hours or a bit more by walk.

This Website indicates the main route; the reader can search for further information on alternative accesses on other guides, you can find the best one at this link (2013, published by CAI and TCI).